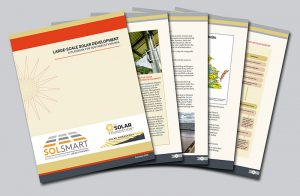 The Solar Workgroup, in partnership with SolSmart and the Solar Foundation, has created an introductory guide for local governments to facilitate large-scale solar projects in Southwest Virginia. In a region that has a long history of energy production, solar technology offers enormous potential for economic development and job growth. Large-scale solar can take many forms, including rooftop or ground-mounted installations at a local corporate office, nonprofit organization, or school. It can also encompass utility-scale projects over many acres on former agricultural or timberlands, mined lands, or industrial sites. Regardless of the type of project, solar is a widely popular, cost-competitive energy choice that helps create sustainable and prosperous communities.

The playbook is directed to municipal and county governments that have an essential role to play in encouraging large-scale solar projects. The first section provides an overview of state and national trends, including recent state legislation that will impact local oversight of solar development. This is followed by an overview of the solar project approval process from a developer’s perspective. The next section is an overview of the state and local permitting process for solar projects, followed by other development considerations such as local tax revenue options, financing incentives, and considerations for solar on brownfields and previously mined lands. The playbook concludes with a step-by-step guide for local governments to facilitate large-scale solar development.

The playbook is part of the Solar Workgroup of Southwest Virginia’s effort to bring solar energy and associated jobs to the region. Over the past few years, the workgroup has met with stakeholder groups and crafted a strategy for local solar energy development. They have worked with cities and counties to bring SolSmart designation to eight counties and cities, implemented group purchase campaigns for commercial solar, and led research efforts.

For additional information, contact Austin Counts at austin@appvoices.org or at (276) 679-1691.